Next year will mark the 50-year anniversary of the Civil Rights Act of 1968, also known as the Fair Housing Act. The landmark bill prohibited by law long-standing practices of housing segregation based on race by landlords and local governments. Despite the law, housing discrimination never fully disappeared, and the effects of decades of discrimination are evident in U.S. cities — many of which still highly segregated.

The forced segregation of black Americans in neighborhoods with suboptimal schooling, poor public transportation, and fewer job opportunities has led to worse social and economic outcomes for residents in those neighborhoods.

Once the fourth largest city by population and wealthiest by income per capita, Detroit’s economic decline over the past several decades has been one of the deepest of any U.S. city. The population of Detroit’s city proper today is approximately one-third what it was at its 1950 peak of 1.8 million people, and it continues to decline at a near nation-leading pace. 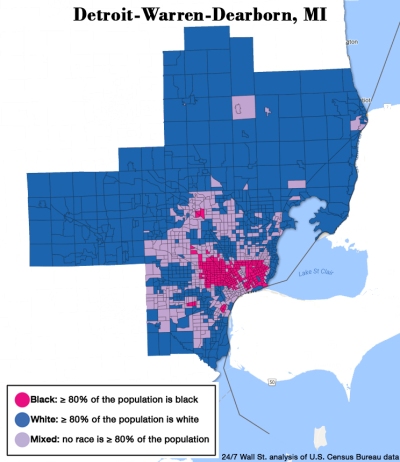 As wealthier, white residents left the city in search of jobs and better living conditions, many poorer, black residents could not afford to move and stayed in the declining city. Such white flight intensified segregation in the city and worsened economic outcomes for minorities. Segregation in the city is delineated by 8 Mile Road, a beltway that acts as a physical and cultural divide between the city’s wealthy, white population and its poor, African American communities. Today, 55.3% of Detroit’s African American population lives in neighborhoods where at least 4 in 5 residents are black, the largest share of any U.S. metro area.

Michigan Among States With the Most Americans on Disability